Tracey Morgan Gallery is pleased to present an exhibition of works from photographer Mike Smith. Entitled The Lost State of Frankland, the exhibition features a selection of images that span over a decade, including recent works, that are a continuation of his career-long exploration of the character and culture of Eastern Tennessee.

Smith has dedicated his artistic career to visually investigating one place, remaining aesthetically aware of his surroundings in a manner that has allowed him to beautifully photograph the nuance of Eastern Tennessee over the span of almost 40 years. Smith’s work evokes familiarity in a way that only great photographs can. They hold a narrative that truthfully and sensitively represents his subject matter in a way that leads the viewer to understand the sensibility of the places and people that he photographs. In spite of this inherent familiarity, his work still holds enough mystery to leave the viewer with engaged curiosity. It’s the balance of this aesthetic sensitivity and visual complexity that makes these works so successful and intriguing.

The title The Lost State of Frankland reflects the place where he passionately practices both the art of photography and the art of getting lost. The story goes that in the 1700s a number of counties in both Western North Carolina and Eastern Tennessee decided to form a new state, initially named Frankland (then later Franklin), and the state existed for a mere four years (1775-1780). In reference to the series Smith states “After thirty-seven years of not knowing where I am, I have managed to photograph what I have discovered on film and sensors with a measure of beauty, awe, humor, disgust, and affection. This selection, I feel, reflects those and other qualities.” The series includes nuanced studies, rural landscapes, and intimate, vulnerable portraits, together continuing his personal portrait of Eastern Tennessee. One standout image depicts “A pickup truck bed, flattened on the picture plane with thirteen rusted stripes, littered with red gun shells, a white plastic bag, and a blue oil can, is nothing short of an East Tennessee American Flag.”

Mike Smith's work has been exhibited at the Whitney Museum of American Art, the Los Angeles County Museum of Art, the San Francisco Museum of Art and the Cleveland Museum of Art. In 2001 he was awarded the John Simon Guggenheim Foundation Fellowship and the Tennessee Governor's Distinguished Artist Award. His work is held in the collections of major museums throughout the United States including the Museum of Modern Art, the Metropolitan Museum of Art, the Houston Museum of Fine Art, and the Art Institute of Chicago. Smith's first monograph, You’re Not From Around Here, was released in 2004 by Johns Hopkins University Press and the Center for American Places with an essay by Robert Sobiesek, curator, Los Angeles County Museum of Art. Originally from Massachusetts, Smith received his BFA from the Massachusetts College of Art and his MFA from Yale University. 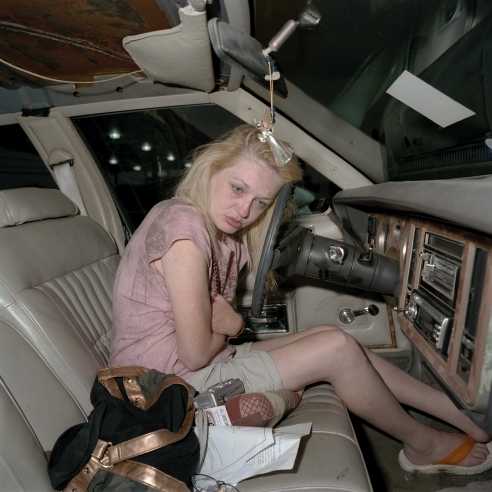